The goal: To build a new county government facility.

The problem: Petroleum contamination in the soil.

The solution: Creek Run and the ICP.

Building a new county government facility can be a complex process, but combine that with subsurface petroleum contamination, and the environmental and legal issues tangle their way into the project.  Our client, a local county government agency, ran into this issue in February 2017 during their development project when black staining and hydrocarbon odors were observed in the soil of a new build site during demolition activities.  Due to the nature of the soil contamination, the limited groundwater contamination, and the absence of exposure pathways, the Indiana Department of Environmental Management (IDEM) assigned a low priority to the site and allowed the project to be completed under the Independent Closure Process (ICP).

Creek Run was requested to perform the cleanup because we provided an efficient scope of work and a cost-effective budget which also allowed for the building development to continue forward during the process.  This project was comprised of a site with an extensive history involving underground storage tanks (USTs), most of which were unknown to our client.  During demolition and excavation activities, five USTs ranging from 1,000- to 2,000-gallon capacity were discovered and removed from the site, and eleven total USTs were removed over the course of the project.

A total of 2,963.74 tons of soil was removed from the site and properly disposed of, 434.31 tons of the soil were impacted with hydrocarbon contamination and removed from three separate excavation areas, and 2,529.43 tons of the soil were removed from within an area of the site determined to potentially contain contaminated soil.  All environmental site work, including four quarters of groundwater sampling of six permanent monitoring wells using the bailer sampling method, the advancement of 19 soil borings, UST removal, and three excavations, was completed within one year.  The general contractors were able to continue construction activities while environmental work was conducted, which helped to move the development progress forward.

The ICP was created by IDEM within the State Cleanup Program to expedite closure of lower priority sites with petroleum contamination, allowing the responsible party to complete investigation, remediation, and closure activities without direct oversight by IDEM personnel.  Fortunately, this project met the criteria, and Creek Run was able to use the ICP guidelines to streamline the timeline of investigatory and remedial work.  The total project from the day the release was reported to the confirmed closure granted by IDEM was accomplished within 18 months.  Historic petroleum contamination and 11 USTs were removed from the site, and the completion of the ICP was accomplished without the use of environmental restrictions.  Using Creek Run’s expertise of the ICP greatly reduced the time, cost, and hassle of environmental cleanup, allowing our client to freely proceed with the construction of the new county government facility.

Creek Run and the ICP: Cleanup & Closure in Under 18 Months 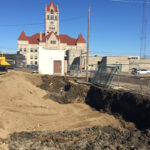 CREEK RUN AND THE ICP: CLEANUP AND CLOSURE IN UNDER 18 MONTHS

If you would like to know how we can assist with any of your projects, use the button to fill out a form and contact us today!

Let's Talk About Your Project
Site by Whitinger Strategic Services