We are currently featured in Fueling Indiana, Winter 2018, pg 46-47. The original article can be downloaded here.

In 1976, after the passage of the Resource Conservation and Recovery Act (RCRA), it is estimated that 1.6 million bare steel Underground Storage Tanks (USTs) were in use in the United States (Lenz, 2014). Most of them were used to store petroleum for retail sale and were located on almost every street corner in cities across this country, but many of them were leaking petroleum and petroleum contaminants into the soil and groundwater. The tanks were leaking from deterioration in the ends and the bottoms, and from the piping and dispensers associated with the UST. Fittings that no longer fit properly, and piping and dispensers that were installed without adequate state and federal guidance or industry policies led to sloppy housekeeping practices (Lenz, 2014).

The RCRA addressed the problem of soil and groundwater contaminants. This then led to the passage of the Comprehensive Environmental Response, Compensation, and Liability Act (CERCLA) in 1980. This federal law was passed after the Love Ca­nal tragedy in New York. Love Canal was home to Hooker Chemical Company and many other chemical companies, making paint, plastics, and other synthetics before, during and after World War II (CERCLA). They dumped their waste byproducts into the city dump. The dump was a former hand-dug canal that had hopes of being part of the Erie Canal system –    but after being partially completed, the project was abandoned.

The city made it into the dump and eventually sold it to Hooker Chemical for its sole use until the mid-1950s when the Hooker Chemical Company ceased operations. Then the city demanded to get the land back, at first as a park and then as a school. Hooker reluctantly agreed, eventually selling the land back to the city for one dollar. By 1970, a school and a new neighborhood had grown out of the parcel of land that once again belonged to the city of Niagara Falls, New York. By the mid-1970s, high cancer rates among children and some high level of publicity doomed the development. The school was closed, homeowners were relocated and much of the area was fenced off (Roy). The remediation consisted of a clay cap and liner and long-term land-use restrictions.

Today, much of the area is still surrounded by a fence, but some of the once-vacant homes are now being used again since some of the area has been opened back to the public. It remains one of the most environmentally sampled loca­tions in the United States (Fowlkes). CERCLA clarified and defined many terms that are still prevalent in many of the reports that we complete for the Indiana Department of Environmental Management (IDEM). These terms deal with environmental impacts and petroleum releases: the “property owner,” the “responsible party” and the “UST owner.” All could be, and many times are different entities. CERCLA also laid the groundwork for training in UST installations and removals and was licensed to complete such work by contractors and the actions each state needed to take (Weber).

The Superfund Amendments and Re-Authorization Act (SARA) became a federal regulation in 1986. This regulation built upon CERCLA, and for the first time in federal regulation, USTs were mentioned. It set a framework and a mechanism for reporting leaks and spills from USTs.

It also provided states, including Indiana, guidance for tank registration and registration tank fees. This led to the establishment of the Excess Liability Trust Fund (ELTF), which provides funding to UST owners and responsible parties for the remediation of petroleum releases for eligible sites.

In 1998 Indiana had more than 40,000 USTs. Now, Indiana has approximately 13,000 USTs. Today, we have fewer tanks. And the tanks we have are much safer. The tanks that have been installed since 1998 are much safer than the bare steel tanks installed before 1988, and more reliable than the retrofitted and upgraded tanks that were in place in 1998. By December 22, 1998, all USTs in Indiana needed to be upgraded to the 1986 federal regulations. That meant no bare, unprotected steel tanks and lines could be in the ground. This date loomed large with many petro­leum jobbers in the state and around the country. Planning, scheduling, preparation, and funding were all important aspects of these projects. If you were going to continue selling fuel, then a substantial investment had to be made in your UST systems to continue operations. All bare steel tanks and piping had to be removed. In 1998, there were more than 5,000 open UST releases in Indiana. Now there are less than 1,000. SARA opened the door for states to take an active role in cleaning up the environment. This included the regulatory authority to create the IDEM, with the ability to enforce the new UST rules. It also created the ELTF. Bare steel tanks were no longer acceptable, and retailers rushed to meet the 1998 compliance deadline (Lenz, 2011).

All UST and piping systems needed to be upgraded to the new standards. That was a huge undertaking in the United States and Indiana. Thousands of tanks had to be uncovered, cleaned, and properly disposed of or retrofitted to meet the 1998 specifications. Steel tanks were replaced with fiberglass (FRP) tanks or protected steel tanks. Protected steel tanks could include retrofitting existing steel tanks by adding fiberglass lining or by adding other forms of protection to steel tanks such as anodes or an impressed current system. These types of retrofitting were an acceptable method as long as documented, mandated inspections continued to be performed and were available to regulators upon request.

Retrofitting did not require a UST to be removed to meet the December 22, 1998, federal deadlines.  Retrofitting a UST was still a costly endeavor, but it did not require a tank to be removed, and therefore a closure assessment was not necessary, and the likelihood of finding reportable petroleum impacts in the soil and/or groundwater during a retrofitting was very unlikely (Lenz). And that is why it was the elected option of many retailers: it was cheaper and, in many cases, a quicker scenario.

If your bare steel tank was leaking in 1988, you still had 10 years to meet the 1998 federal guidelines. And if you elected to meet the new standards by one of the retrofitting methods, the tank did not come out of the ground and the release may not ever have been discovered. And in fact, the tank could still be in operation today and may not violate any federal standards. The tank closure assessment and finding any soil and groundwater impacts, in many cases, can only be discovered after a tank closure is complete. Therefore, tanks installed many years before the passage of RCRA in 1976 could still be in place and in compliance – and much safer than they were prior to 1976 (Lenz, 2014).

The ELTF fueled the efforts to facilitate the remediation of petroleum releases and cleanups from historical leaks and spills discovered in the 1990s. Indiana is a leader in the Midwest in this area. The fund has been properly managed, handled and utilized by IDEM and the Financial Assurance Board (FAB) – which is tasked with providing fund oversight.  The fund in Indiana, unlike the fund in many sur­rounding states, is adequately funded from annual UST owner tank fees and a tax on the retail sale of gasoline and diesel fuel in the state. With consumers as users of petroleum systems, we have partial responsibility and an obligation to pay for their need, although the diesel tax is a relatively new addition (last 15 years). The fund is designed as a reimbursement that provides the mechanism necessary to help owners and operators of their underground storage tank system be reimbursed for the approved cost incurred after meeting a deductible (Braun). The average review time for claims made is about 70 business days, and the average completed project is near $350,000, with reimbursement collected of $300,000 per site (Lenz, 2011).

There is a cap on the limits and payments per year that affects large retailers, but those limits have become manageable. This mandate was a federal directive from the 1986 SARA regulation. Adequate funding from IDEM from the tank fees and the fuel tax has led to the completion of hundreds of UST petroleum release investigations and corrective actions many were historical releases discovered during the 1990s as owners rushed to meet the December 22, 1998, federal compliance regulations deadline. The deductible before 2016 was generally $35,000. Many changes were implemented in 2016 that included a lower deductible and other changes in the eligibility requirements.

The federal regulations, beginning with RCRA in 1976 –   40 years ago –   have made great strides in helping to keep our environment clean. IDEM and ELTF, created in part because of CERCLA in 1980 and SARA in 1986, has helped Indiana become a leader in cleaning up historical petroleum releases (Lenz, 2014). Indiana has fewer tanks than in 1976, down to about 13,000, and fewer open releases, only about 1,000. We have fewer USTs, and the ones we have are safe. This is not fail-proof by any means, but when installed and monitored properly, a release from an underground storage tank is less likely to occur today. If it does, it is much easier for retailers to address it responsibly with the availability of money being disbursed through IDEM and the ELTF fund. 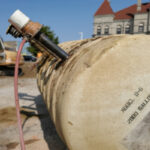 UNINTENDED CONSEQUENCES AND THE “GRAY” AREAS OF INDIANA’S ELTF 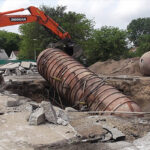 If you would like to know how we can assist with any of your projects, use the button to fill out a form and contact us today!

Let's Talk About Your Project
Site by Whitinger Strategic Services